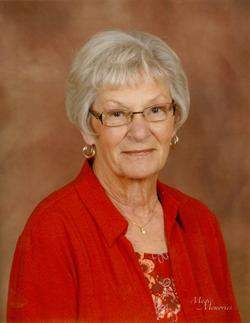 LaVerne (Boll) Hansen, 82, passed away at Oak Crossing in Detroit Lakes at 12:15 p.m., on August 14, 2014, the day of her 60th wedding anniversary. She was held by her husband, Reg, as she took her final breaths. LaVerne lost only a month long struggle with liver cancer.

A memorial celebration in LaVerne's honor will be held at 11:00 a.m., Thursday, August 21, 2014, at Calvary Lutheran Church, Perham. (619 3rd Ave., SW) A time of fellowship will begin one hour prior to the memorial celebration at the church on Thursday. Lunch will follow the service. In lieu of flowers, memorials are preferred to social ministry programs at Calvary Lutheran Church.

LaVerne was born on July 12, 1932, in the town of Herman, Sheboygan County, WI, to Hubert and Selma Boll. She grew up on a dairy farm and graduated from Plymouth Wisconsin High School in 1950. She enrolled at the University of Wisconsin - River Falls and graduated with a degree in elementary education in 1954. It was there that she met her husband, Reginald Hansen. They were married August 14, 1954. LaVerne taught elementary grades for 3 years in Ellsworth and Wittenberg, WI, and then became a full-time mother to her 3 children. Later in life, she held a number of different positions in retail and food services.

In 1973, Reg, LaVerne and their 3 children moved to Sioux Falls, SD where they spent the next 23 years. Upon retiring in 1994, they moved to their retirement home on Loon Lake near Vergas, MN. They spent 20 years enjoying the lakes and trees of Otter Tail County.
LaVerne was primarily a mother and homemaker. She was an avid vegetable and flower gardener. Perhaps her first love was quilting. She made quilts for her children, grandchildren and great grandchildren. She was a member of the Perham Chapter of Quilts of Valor, making quilts for returning wounded service personnel. LaVerne was also active in number of social ministry programs at Calvary Lutheran Church.

LaVerne was preceded in death by her parents.

To order memorial trees or send flowers to the family in memory of LaVerne Hansen, please visit our flower store.