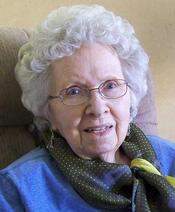 Leila Elizabeth (Baker) Williams died on July 4, 2012, in Frazee, MN. At the request of Leila there will be no public service.

She was born the daughter of Ralph Baker and Leila (McCoy) Baker on February 6, 1918, in Mansfield, OH. She graduated from high school in 1936 in New Concord, OH. In 1941, she moved to Los Angeles, CA, where she worked in defense assembly lines during the war and then when the troops came home, in a variety of restaurants. She married James Williams in 1951. She moved to Zanesville, OH, in 1959. In OH she held several secretarial positions until her final employment at Good Samaritan Hospital from 1968 to 1983 in the Clinical Education Department. After retirement, she was a long-time volunteer at Good Samaritan/Genesis Medical Center and an active member of the Trinity Lutheran Church Quilters. She moved to MN in 2006 to be near her daughter and son-in-law.

Leila traveled extensively. She was an accomplished seamstress and quilter. Above all she enjoyed loving relationships with her family and friends.

She is survived by one daughter, Melinda (Anthony) Cloose, Frazee, MN, and her grandson, Jeremy Roy Reed, of Athens, OH. She is also survived by a sister, Mary Jo Baldridge of Cranberry Township, PA; a sister-in-law, Phylina Baker of New Concord, OH; as well as many nieces and nephews.

She was preceded in death by her sister, Margaret Jean Haskins, and her brother, Edward Baker.

To order memorial trees or send flowers to the family in memory of Leila Williams, please visit our flower store.