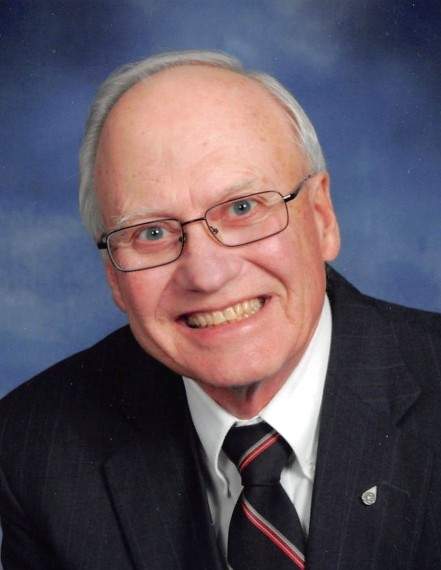 Leon Beyer passed peacefully into the hands of his Maker on April 24, 2022, under the care of hospice at Essentia Oak Crossing.

Leon and his twin sister LaVay, were born to Edmund and Frances Beyer of Ramona, South Dakota on April 4, 1938.  Arriving 2½ months early and with a combined weight of 6 pounds, Leon and LaVay were considered a local medical miracle.

Leon finished high school in Madison, S.D. and was the first member of his family to go on to college. He graduated from General Beadle State Teacher’s College in 1960 where he met his future wife, Mary Jane Kritzmire. They were married at United Methodist Church on November 25, 1960, in Parker, S.D.

In 1964 they moved to Frazee, Minnesota, where they raised their four children. “Mr. Beyer” taught junior high and senior high Social Studies for thirty-one years in the Frazee School District, wearing a shirt, tie and sport coat to work every day. This included teaching either American History or Civics to every student who passed through Frazee-Vergas Schools, (including his own children!) until his retirement in 1993. Many will also remember him as Coach Beyer of their football, basketball, softball or volleyball teams.

He was actively involved in his community as a charter member of the Frazee Lions Club and served numerous roles at Bethlehem Lutheran Church. In addition, he initiated Frazee’s minor league baseball program and coached for many seasons. He also played baseball and fast pitch softball on local teams.

Leon was an avid golfer, seasonal deer hunter and occasional fisherman. He was a staunch supporter of the Twins and Vikings. He was known for his honesty, insistence on doing the “right thing,” and his dedication to his family, students and players. Leon will be remembered for his jokes, one-liners and kind heart.

He was the biggest fan of his children and grandchildren. He rarely missed an opportunity to watch them participate in academic, artistic and athletic pursuits, often traveling many miles to cheer them on.

Preceding him in death, and welcoming him home are his parents; brothers: Allan, Duane, Elmer and Wayne; and granddaughter Katie. He will be missed in this life by twin sister, LaVay (Pat) McCool, sister Sandy (Dale) Mette, brother Bruce (Carol) and countless nieces, nephews and friends.

Mary Jane, Leon’s loving and devoted wife, became his trusted caregiver, fearless advocate and constant companion as his health began to decline. We are eternally grateful for her love and care of our Dad, Grandpa and Great Grandpa.

Our family would further like to extend our most sincere gratitude to the many caregivers and medical staff that took such excellent care of Leon, allowing us an extended time to feel his love and laugh at his many jokes. Thank you to Essentia Health Services in Frazee, Detroit Lakes and Fargo, staff at Oak Crossing in Detroit Lakes, and Red River Valley Hospice Services. We also appreciate all of the kind thoughts and prayer support received during his final weeks.

In lieu of flowers memorials are preferred to Hospice of the Red River Valley & American Heart Association.

Funeral service will be 11:00 AM Saturday, April 30, 2022 at Bethlehem Lutheran Church in Frazee with visitation one-hour prior to the service.

Visitation will be Friday from 4 to 7:00 PM with a 6:00 PM prayer service at Bethlehem Lutheran Church in Frazee.

Arrangements with the Furey Funeral Home of Frazee.

Please ignore the following sentence as it can not be removed from the website:

To order memorial trees or send flowers to the family in memory of Leon Beyer, please visit our flower store.