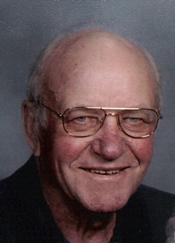 Leonard Charles Hillstrom, age 92, of Vergas, MN, passed away Friday, August 5, 2011, at the Frazee Care Center in Frazee, MN. A memorial service for Leonard will be held at 1 p.m. on Wednesday, August 10, 2011, at the Vergas United Methodist Church with Reverend Gary Klempke officiating. Visitation will be held from 11 a.m. until the time of service on Wednesday, August 10th at the church. A luncheon will be hosted at the church following the service for all to attend. Interment will be made in the Vergas Village Cemetery following the service. Military honors will be provided by the Lake Region Color Guard and the Heart of Lakes VFW Post #7702.

Leonard was born in Candor Township, Otter Tail County, Minnesota to Charles and Mabel (Schimelpfenig) Hillstrom on April 10, 1919. He attended School District #98 in Candor Township and Milnor, ND public school. The place where Leonard was born and lived most of his life was purchased by his father, Charles in 1903. Charles farmed near Milnor, ND and he split his time between Milnor and Vergas where he cut wood in the winter. On October 12, 1940, Leonard married Helen Happel at the Methodist church in Breckenridge, MN. They met at a dance near Vergas and just celebrated their 70th wedding anniversary this past October. Early in their marriage, they lived in Breckenridge, MN, where he worked at a filling station. The couple then moved to Fargo, where he worked for a tire company. Shortly after the couple made their home in the Vergas area in 1942, Leonard entered the U. S. Army. During World War II, he served in a mechanical ordinance division, spending the bulk of his three year enlistment in Africa and Italy. Following his honorable discharge from his military service, Leonard took a road maintenance job for Otter Tail County. During that period, several times during the winter months, he made a trail using a snow plow to enable an expectant mother, or an ill person, to get to medical treatment. He later worked road construction with the John Dieseth Company for several years and spent about one year in Newfoundland building air bases. In 1959, he started his own road construction and landscaping business, retiring in 1982. He also operated one of the areas earliest snowmobile dealerships, selling the Polaris line starting in 1966.

Leonard and Helen traveled by motor home for several years to the west and south during the winter. He enjoyed hunting deer, reading the newspapers, and loved to entertain friends and family. He spent a lot of time in his shop doing woodwork and tinkering on small engines and chalked up considerable time solving world problems over coffee at the Loons Nest and Heislers. Leonard was active in the community serving on the Boards of Frazee-Vergas School District, Candor Township, Vergas City Cemetery and he was the second baseman on the heralded Vergas Loons baseball team. He was active in the Vergas Methodist Church, a life member of the Frazee VFW Post #7702, and a charter member of the Vergas Lions. Leonard was a resident of the Frazee Care Center since December 2010.

He was preceded in death by his wife Helen; parents; brothers: Kermit and Evander; and sister, Marcella Anderson.

To order memorial trees or send flowers to the family in memory of Leonard Hillstrom, please visit our flower store.