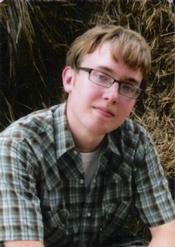 Logan Sage Hoehne was born September 5, 1992, in Perham, Minnesota. He was baptized and confirmed in the Christian faith at St. John's Lutheran Church in Corliss Twp (rural Perham), MN. He passed away in rural Elbow Lake on September 3, 2011, just two days shy of his 19th birthday.

From the very minute he was born, Logan was a rare kind of individual. He recognized his uniqueness and was comfortable with it. "I will go through these little fads, you see" he said about himself in a college essay, "where I will have an extreme interest in one thing for a little amount of time. Sporadic Obsessive Disorder is the name I have ascribed to it. Trading cards, guns, cars, and science fiction are all just some of the things I have been interested in and then dropped. Maybe I am still just trying to find out exactly what I am. Maybe it's just a personality type. Whatever it is, that's me."

Logan lived life with clarity about what he loved and what he didn't. He zealously hated leftovers, and loved fresh flatbread and daily naps. He refused to taste pop because it was unhealthy, but he didn't mind sampling the leftover Easter wine while others were out doing chores. In a book he authored in early elementary, he stated his only serious fears were "poisonous mushrooms and bulls". At age three, Logan enjoyed wearing a red blazer, plaid slacks, and "necker tie" to church and to Grandma's. Later, in his teenage years, Logan adamantly refused to wear a name brand across his chest. "I won't pay money to be somebody's walking billboard," he said more than once. Logan wore out a pair of Doc Martins every year - an indestructible shoe. He walked the fields of his family's farm in Evergreen several times a day, lost in deep thought, talking to himself and chuckling aloud. At family gatherings, such as birthday parties, Logan would join the crowd for a while and then just disappear to take a nap or take a walk to feed his curiosity. His own birthday parties were no exception. He questioned things others didn't and he accepted things others couldn't. He made us feel when we didn't want to and think harder than we knew we could. His was a life of continual contrasts and surprises.

Logan was at the same time a dreamer and a most practical man. "Everything I can do seems to be too limited," he wrote. "Everything I want to do seems impossible." As a little boy, he planned to become a kitty rancher when he grew up, raising a turkey barn full of kittens so all children too poor to have a cat of their own might stop by and pet one for free, whenever they needed comfort. In primary school, Logan convinced his mother he needed a duck costume in two hours for an elementary program that evening. She raced against the clock to complete it for him. He was the only fully decked out duck in the place. Much to the chagrin of his brothers, Logan was not supposed to be a duck. He didn't have a part or a need to appear in feathers made from toilet paper; it was just something he wished to do.

Logan found daily joy in simple things on the family farm. He drank milk by the gallon, did chores, and wrestled his brothers; if he lost the physical fight, he was never bested verbally. He was a gun enthusiast and second amendment supporter. Logan was uniquely talented in written and verbal communication, yet was a mostly quiet, respectful young man. Shortly after he learned to write as an elementary aged child, Logan and his brother wrote and published The Kitty Gazette, a weekly magazine of creative stories which they mailed to cash paying patrons for fifty cents an issue. When he grew older, Logan fell in love with politics and debated with anyone who had the courage to challenge his deep thinking and incredibly sharp wit. His cousins found his definitions hilarious in the game of Balderdash.

Logan's longest lasting dream was to attend college. He began saving for tuition before he got on the bus for kindergarten. If his brothers or parents dropped a dime on the floor or left coins in the car, it went into Logan's college fund. When he broke too many pairs of glasses wrestling, Logan ordered a half dozen pair online for $4.99 each, keeping a stock pile handy for the inevitable. Due to his frugality, hours of studying, and determination (he once completed an entire economics curriculum in two days), Logan achieved his life long goal of attending the University of Minnesota, Morris, for two weeks this fall. His cousins who knew him best predicted he would become a millionaire: a lawyer or an inventor or a noteworthy politician. Logan would have been equally happy a hermit or pauper.

Logan was not motivated by popularity and didn't succumb to peer pressure. Logan found time for small children and small animals and large social issues. While he had a hot temper, he never held a grudge. It was as though he knew life was too short for hate or spite and he was too busy pondering new ideas to carry old baggage.

In the words of Logan's friends, 'There is an old quote that goes something like, "A loyal friend laughs at your jokes when they're not so good, and sympathizes with your problems when they're not so bad." To us that fits Logan perfectly. This is the Logan that we remember. He was a guy that, no matter how big or small your problem was, would be there to listen and offer his assistance in any way. He was a real stand up guy.'

He participated in FFA and Cross Country and graduated an honor student from Frazee High School in May of 2011. In his own words he stated, "...and I didn't turn out to be a half bad kid".

Logan Sage Hoehne is survived by his parents, Steve and Tawnia Hoehne, his brothers, Jordan Hoehne and Skylar Hoehne, all of Frazee; his maternal grandmother, Audrey Perala of New York Mills; his paternal grandparents, Gilbert and Mitsuko Hoehne of Perham; a host of aunts and uncles and cousins, much extended family and many good friends. Passing before him was his maternal grandfather, Jacob Perala.

We regret that we will never fully realize the gift of Logan's intelligence, wry humor, stubborness, humility and honesty, the likes of which the world has not met in another person. One of one--that was Logan Sage Hoehne. Buried with Logan is his childhood blanket, his "kitty woobie", and a piece of every single one of us, who knew him and loved him and love him still.

To honor the life he led with unflinching practicality and an insatiable appetite for knowledge, the family has chosen to forego some funeral traditions and instead dedicate those monies toward a scholarship in Logan's memory. The hope is that Logan will look down from above, nodding in appreciation as someone else's seed of curiosity becomes an intellectual blossoming that enriches us all.

To order memorial trees or send flowers to the family in memory of Logan Hoehne, please visit our flower store.