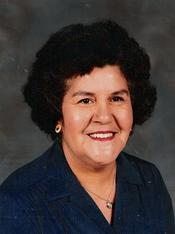 Lois was born July 10, 1925 in Beaulieu, MN, to George and Effie (Bishop) Shambow. She grew up in rural Mahnomen and attended Mahnomen High School. Following her schooling, she moved to Detroit, MI, where she worked in the auto industry. Lois was united in marriage to David Sokolik in Detroit. Lois' life was blessed with 3 children: Donna, David and Ronald. The family lived in Detroit for many years, until Lois eventually moved to Mahnomen, MN. There, she worked at the Shooting Star Casino until her declining health forced her to retire.

She enjoyed playing bingo, the company of her cat, and spending time with her sister-in-law and family in Mahnomen and attending Mass at St. Michael's Catholic Church in Mahnomen.

She was preceded in death by her son, Ronald; brother, Marvin and two nieces.

To order memorial trees or send flowers to the family in memory of Lois Sokolik, please visit our flower store.