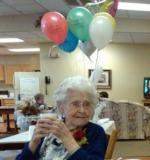 Beaner was born on March 9, 1915, in Fargo, ND the daughter of Hildor and Elsie (Dove) Johnson. Beaner was raised and educated in Frazee, MN. It was in Frazee that she met her future husband, Jerry Thelen. Beaner and Jerry were married in Frazee in 1934 where they started their family. Beaner worked for the creamery in Frazee for many years.

Beaner enjoyed playing cards, going to the casino and traveling. She was a devoted wife and mother who loved to cook and kept many of her relatives and friends supplied with homemade breads and buns. There were always fresh cookies and pies waiting for her friends that stopped by. She also had beautifully crocheted afgans and other fancy crocheted pieces.

Beaner is survived by her son, Donny Thelen of Fort Walton Beach, FL; her sisters: Joyce Wothe, Olive Anderson and Gloria (Bill) Snamiska; 2 grandchildren; along with numerous nieces and nephews.

She was preceded in death by her parents; her husband Jerry in 1973; 2 sons: Roger and Kenneth Thelen; a sister, Eleanor Olson; and a brother, Merle Johnson.

To order memorial trees or send flowers to the family in memory of Loreen Thelen, please visit our flower store.