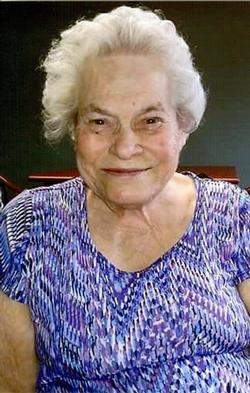 Lorraine G. Carlson, age 88, of Frazee, MN, passed away surrounded by her family at St. Mary's Essentia Hospital in Detroit Lakes, MN, on Wednesday, June 17, 2015.
Funeral service for Lorraine will be held 1 p.m., Saturday, June 20, 2015, at the United Methodist Church, Frazee. Visitation will be held 5-7 p.m., Friday, June 19, 2015, at Furey Funeral Home, Frazee, with a prayer service to be held at 7 p.m. Visitation will continue one hour prior to the service at the church on Saturday. Interment will be made at Lakeside Cemetery, Frazee. Furey Funeral Home is assisting the family with funeral arrangements. Leave online condolences at www.fureyfh.com.
Lorraine "Larry" was born July 17, 1926, at home in Burlington Township, Becker County, Minnesota, to Charles and Lucy (Collett) Harrington. She grew up in Frazee where she attended school. She continued her education in Moorhead. She then moved to the cities where she gained employment at an ammunitions factory. While in the cities, Lorraine roomed with Mary Turcotte. It was during this time, Lorraine met Mary's brother, Louis, who she married in May of 1945. The couple had 5 children: Alan, Gail, Daniel, Laddie and Linda. The family moved to the Frazee area in the late 1950s. The couple bought the family farm in 1959, where Lorraine resided until moving to the Frazee Assisted Living in August of 2009.
Lorraine worked at Swifts Turkey Plant for 20 plus years. Her kind and loving character lent well to her role as foster parent which she did for more than 30 years, retiring in 1987.
The whole family participated in the family farming, Lorraine was no exception. She enjoyed her time outside and tended vegetable and flower gardens. She loved to cook and her family enjoyed her homemade caramel and cinnamon rolls, rhubarb crisp as well as her canned goods she prepared. She was a member of the Whispering Pines homemakers group, a monthly birthday club, participated in a bowling league, was a 4-H leader, served as president of the VFW Ladies Auxiliary, volunteered at the Frazee Care Center, and was a very active member of the United Methodist Church in Frazee where she often attended bible study and volunteered wherever she was needed. Lorraine's home was always open and she welcomed everyone who came by. She will long be remembered for the many family reunions she enjoyed hosting at the farm.
Lorraine's life was saddened with the passing of her husband, Louis in 1972. Following his passing, Lorraine re-connected with high school sweet-heart, Dave Carlson. The couple married in 1973. The couple enjoyed many years together, and Dave passed away in 1997.
Lorraine is survived by 3 children: Alan (Diane) Turcotte of Detroit Lakes, Gail (Juel) Johnson of Circle Pines, MN, and Linda (Gerald) Etter of Eveleth, MN; daughter-in-law, Christine "Nina" Turcotte of Frazee; 9 grandchildren; 17 great grandchildren; 3 great great grandchildren; husband Dave's 3 children: Glen Carlson of Santa Fe, NM, Susan Carlson of Portland, OR, and Scott (Vicki Waclawik) Carlson of Audubon, MN, and their 3 children; 2 sisters: Hazel Senske of Albert Lea, MN and Arlene (Ron) Larson of Rockford, MN; numerous nieces and nephews; numerous foster children; along with several other relatives and friends.
Preceding her in death were her parents; husband Louis in 1972; husband Dave in 1997; 2 sons: Reverend Daniel Turcotte in 2003; and son Laddie and his wife, Jenny Turcotte in 1975; as well as 4 siblings: Paul Harrington, Dick Harrington, Helen Hunt and Neil Harrington; along with several foster children.

To order memorial trees or send flowers to the family in memory of Lorraine Carlson, please visit our flower store.