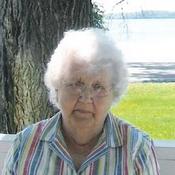 Margaret Courneya, age 87, of Frazee, MN, passed away at her home on Sunday, March 6, 2011 under the care of Hospice of the Red River Valley.

Funeral services will be held 11 a.m. Thursday, March 10, 2011 at the Frazee Event Center with Pastor Gary Klempke officiating. Visitation will be held from 4-7 p.m. on Wednesday, March 9, 2011 at the Furey Funeral Home in Frazee with a prayer service at 6 p.m. Visitation will also be held one hour prior to the service at the Frazee Event Center on Thursday. Interment will be made next to her husband, Gerald, at the Lakeside Cemetery in Frazee. Lunch will be hosted at the Event Center following the service for all to attend.

Margaret was born August 13, 1923 in Fargo, ND to Albert and Marie (Rogstad) Bjorge. She was the eldest of three children; having a younger sister, Marie and a younger brother, Robert. In Grade 6, Margaret's family moved to the Tamarack Refuge where she lived until her graduation from Frazee High School in 1941. Following her graduation, she worked at the Dime Store in Detroit Lakes, MN, before her marriage to Gerald Courneya in 1943.

The young couple made their home near Rose Lake in Frazee, MN where they raised their 6 children: Judy, Steve, Cathy, Dennis, Tim and Julie. They bought the Courneya farm in 1950 and continued to farm until 1991.

Margaret was very active in community service. She served as President of the Frazee PTA, Garden Club, Home-makers Club, Knitting Club, and was also an avid sports fan. She loved spending time with her family, traveling and politics.

She was preceded in death by her parents; her husband Gerald; and her brother, Robert who was a Korean War Veteran, MIA.

To order memorial trees or send flowers to the family in memory of Margaret Courneya, please visit our flower store.