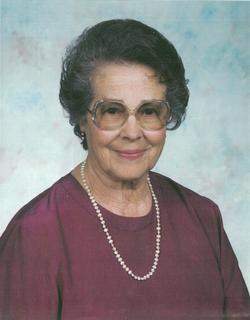 Margaret "Peg " Emeline Ballard passed away surrounded by her close friends Friday, August 14th, 2015 at Perham Living. Funeral services will be held 1:30 p.m., Wednesday, August 19, 2015, at the Perham Living Chapel. Visitation will begin one hour prior to the service at the Perham Living Chapel on Wednesday. Interment will be made at Vesta Cemetery in Nebraska at 1 p.m., Wednesday, August 26, 2015. Furey Funeral Home is assisting the family with funeral arrangements. To leave online condolences, please visit www.fureyfh.com.

Peg was born to George Jasper Ballard and Leta Reed Ballard on February 3, 1918. Margaret was baptized when she was eight years old at the United Brethren Church in Crab Orchard, Nebraska. She attended School District 63 through eighth grade then went on to high school in Vesta, NE where she graduated in 1935. After graduating, Margaret worked as a portrait photographer for Wheelin studio in Lincoln Nebraska.

On July 2, 1939 she married James "Jim" Evans in Lincoln, Nebraska. They resided in Johnson County, Nebraska until Jim joined the Navy.

In 1943 Margaret joined the Navy Hospital Corps and served as Phm 3rd Class, at Shoemaker Hospital in Ventura, California until her honorable discharge in October 1945.

Over the years Margaret was a farmer, a housewife, a mother, gardener, Sunday school teacher and held responsible positions while living in Lincoln, Nebraska. Her life was characterized as a person who liked to help people. In 1976, Margaret retired from the Lincoln/Lancaster County Health Department and in 1990 Margaret, Jim, and Kevin moved to Vergas, MN where she resided until the time of her death.

Preceding her in death was her husband, Jim; their son, Kevin; an infant son; her parents; and one sister, Guida Butterbaugh. Margaret will be interred at the Vesta Cemetery next to her husband and two sons.

To order memorial trees or send flowers to the family in memory of Margaret Evans, please visit our flower store.