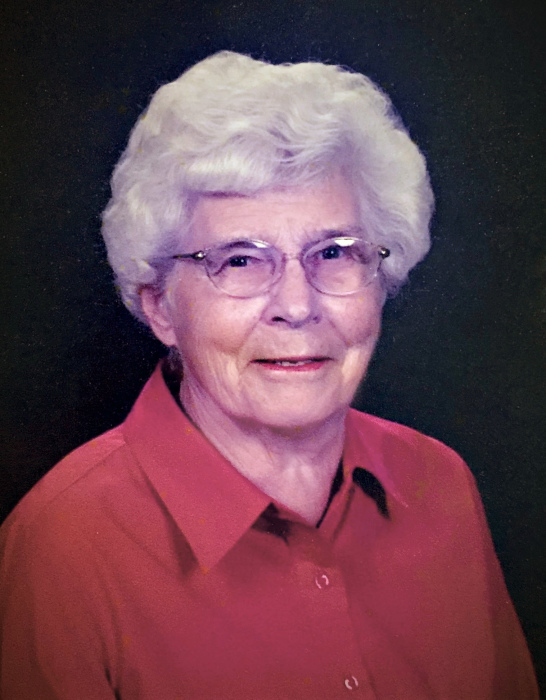 Marian Ellen Flatau, 91, was called home to be with her Savior on Tuesday, August 27, 2019. She was born on August 13th, 1928, in Frazee, MN, middle of three children, to Otto and Emma (Ratz) Richter.  She was raised on the family farm in Hobart Township.  She was baptized and confirmed at St. John’s Lutheran Church, Vergas, MN.  Marian attended Lake Sybil Country School, St. John’s Lutheran School, Vergas, and Frazee High School where she graduated as salutatorian of the class of 1945.

Following Marian’s graduation at the age of 16 she was recruited to be the bookkeeper for the Frazee Creamery where she worked until her marriage.  During the summer of 1945 while Marian was doing the work she loved on the family farm a helpful young man on the threshing crew offered to lift the cream cans into the cooler for her.  A romance began and Marian and Rodney were married on October 1, 1947 at Bethlehem Lutheran Church, Frazee, MN.  They were blessed with four children.  Together they farmed in Hobart Township for 40 years and she resided in her farm home for 72 years.  During the farming years Marian managed driving the tractor, cooking the meals, gardening and canning, milking the cows and raising the four children, all of which she loved doing.  Their farm was a full partnership for both Marian and Rodney.

Marian can be remembered for her genuine love for people and her interest in their lives.   Over the years friends of her children, close & distant relatives, neighbors and acquaintances would come for a visit and conversation and leave as friends.  Her positive attitude, warmth, graciousness and hospitality were evident in how often the cookies and coffee were on the table ready to welcome visitors.

Marian used her God-given gifts to serve her Lord in a variety of ways which included:  a founding member of the Hope Homemakers, Sunday school and Vacation Bible school teacher, 4-H leader for the Eagerettes 4-H Club, an officer of her local, zone and district Lutheran Women’s Missionary League, and Hobart Township Clerk for over 20 years.

Marian loved the outdoors.  She thrived on the time she could spend outside doing chores, hanging laundry, sweeping the deck, and feeding the outdoor furnace.  As the years went by this time was her quiet time and a way for her to be renewed and refreshed.

Funeral service will be 11:00 AM Saturday, September 7th, at Bethlehem Lutheran Church in Frazee, Minnesota. Burial will be in the Flatau Family Cemetery.

Visitation will be Friday September 6th from 5 to 7:00 PM with a 7PM prayer service at the Bethlehem Lutheran Church. Visitation will continue for one hour prior to the service.

To order memorial trees or send flowers to the family in memory of Marian Flatau, please visit our flower store.
Open