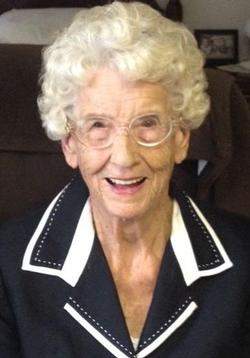 Marjorie was born October 6, 1924 in Newport, TN, to Hagen and Zula (McGuffie) Loveday. The family moved to White Pine, TN, where Marjorie attended school. The family eventually moved to Morristown, TN. In 1942, during WWII, Marjorie worked in Alcoa, TN, at a defense plant that produced aluminum products. She continued this work until 1945, when she married Warren "Bud" Gilbert Schmidt. The couple was married May 12, 1945 in Maryville, TN. They moved to Hondo Field, TX, for a short time before making their home in St. Paul, MN. They raised 4 children: Gerald, Jeffty, Sheila and Shelley. She worked for the Mounds View School District #621 from 1962 to1966. From 1967 to 1972, during the Vietnam War, she worked for the Twin Cities Arsenal. In 1977, Marjorie took a job with Professional Systems contracted through IBM. She did this until 1980, when the couple moved to Vergas, MN.

Marjorie enjoyed the outdoors and spending time with her children and grandchildren. She was a member of the Vergas United Methodist Church, the United Methodist Women's group, and the Legion/VFW Auxiliary.

Preceding Marjorie in death were her parents; husband, Warren "Bud"; 1 granddaughter; 3 brothers: one at infancy, James and Clyde; and 2 sisters: Kathleen Atkins and Blanche Rogers.

To order memorial trees or send flowers to the family in memory of Marjorie Schmidt, please visit our flower store.