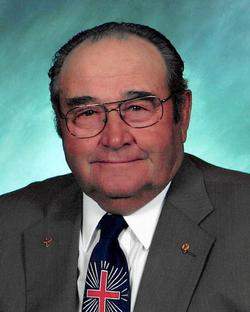 Marlin was born November 12, 1930, at home in Gorman Township to Edwin and Alvina (Mindermann) Ziegler. He was baptized and confirmed at Bethlehem Lutheran Church. He grew up on the family farm in Gorman Township. He attended school through the 8th grade in Luce, MN, then attended 1 year of school in Perham.   Following his schooling, Marlin continued to work on the family farm, which he purchased in December of 1950.
Marlin married Virginia Schwanz on May 22, 1953, at Bethlehem Lutheran Church in Frazee. Marlin was drafted into the United States Army in 1953.  He served stateside and Virgie was able to travel with him.  He was honorably discharged in June 1955.  The couple moved back to their farm which Marlin loved where they raised a daughter, Linda.
Marlin was very active in his community and was a member of the Lake Region Electric Board and the Great River Energy Board for 18 years serving from 1987 through 2005.
Marlin was a very active member of Bethlehem Lutheran Church and served as a church elder, taught release time for more than 30 years, along with serving on various church boards.

When Marlin was not busy tending to the farm, he enjoyed hunting, working in the shop tinkering with and creating things, attending auctions and purchasing rare farming tools; and has acquired quite a collection over the years. He also enjoyed working in the woods, cutting firewood and sawing logs and building things with the lumber he had sawed. He loved to take drives and enjoy the scenic countryside. Marlin and Virgie also liked to visit with family, friends and neighbors. He will be dearly missed.


To order memorial trees or send flowers to the family in memory of Marlin Ziegler, please visit our flower store.