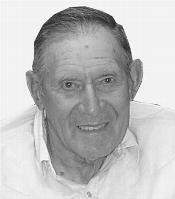 Martin Carl "Bud" Fischer, 93, passed away peacefully on Friday, December 21, in the loving presence of his family and the staff at St. Mary's Essentia Medical Center in Detroit Lakes.
A memorial service will be held at Frazee Care Center on Thursday, December 27, at 2 p.m., with visitation beginning at 1 p.m.
Bud, who had most recently made his home at the Center, had been a member of the facility's Assisted Living family for the past several years. Prior to that, he resided on the family's century farm in rural Frazee, where he operated a resort.
Born on January 2, 1919 to Paul and Martha Fischer, Bud and his family faced many challenges in addition to the Great Depression. Martha was widowed the same year that Bud, then age 4, contracted polio. He was hospitalized periodically throughout his youth. His siblings, Frances, Ruth, Albert (Ike) and Rose, would transport Bud to school by wagon or sled whenever possible, and he worked hard to educate himself.
While he was growing up, he spent a lot of time rowing on Fischer Lake to build up his strength. That love of the lake as well as fishing led him to a lifelong resort business which extended across generations of families returning year after year to stay in one of Bud's cabins, campers or tents. The first cabin was built in 1942. Bud's strategy was to keep his prices reasonable and provide a private, quiet spot to visit.
His clients came from all over, including Minnesota, Iowa, Nebraska and Illinois. When his available space filled, Bud referred his customers to other local resorts, and in turn those owners sent their fishermen to Fischer Lake for a change of pace. In the fall, after he'd closed his cabins for the winter, Bud would drive through the Midwest to visit his friends. He learned a lot from people in all walks of life, because of his wonderful ability to listen.
When asked his advice for a long, healthy life, Bud said, "Eat lots of fish." He followed his own rule as often as possible, especially if he could get a side of wedgie potatoes.
Bud was preceded in death by his sisters Frances Johnston Kennard and Ruth Herbst, and brothers-in-law Lester Johnson, Orville Kennard, Louis Herbst and Bill Ebeltoft, and is survived by one brother and sister-in-law, Ike and Larene Fischer, one sister, Rose Ebeltoft, all of Frazee, and many nephews, nieces and friends.
The family prefers that memorials be directed to Frazee's Neighbor-to-Neighbor program.

To order memorial trees or send flowers to the family in memory of Martin Fischer, please visit our flower store.