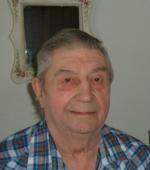 Marvin "Bud" Duane Bartel, age 77, of Frazee, MN, passed away Friday, August 13, 2010 at St. Mary's-Innovis Health in Detroit Lakes, MN.
Bud was born June 16, 1933 to Julius and Laura (Illg) Bartel in Frazee, MN. He grew up and attended Toad Lake Country grade school and then attended Frazee Public High School graduating with the class of 1952. Following graduation, Bud enlisted in the United States Air Force where he served in Germany and France. Following his return home, Bud was united in marriage to Delaine Lubitz on October 24, 1959. This union was blessed with 3 children: Darwin, Kevin and Nancy. Bud was honorably discharged from the United States Air Force in 1963. He then gained employment with a construction company where he worked for a time before he started his career as a dairy farmer in Toad Lake with his brother, Eugene. When Bud was not busy tending the dairy farm, he enjoyed the out doors when he was hunting or fishing on Wolf Lake. He also enjoyed visiting and playing cards at the Toad Lake Store as well as playing a good game of cards with his grandson, Skylar. Bud was a longtime member of the Wolf Lake Lions Club, the Frazee AMVETS Post #612 and the Sebeka American Legion Post.
Bud is survived by his wife, Delaine; his 3 children: Darwin (Susan), Kevin (Marianne) and Nancy (Bryce) Stromstad all of Frazee; 1 grandson; 6 step grandchildren; 8 step great grandchildren; 1 brother, Eugene of Frazee; and numerous nieces and nephews.
He was preceded in death by his parents.
Funeral services will be held 11 AM, Monday, August 16, 2010 at the St. Paul's Lutheran Church in Evergreen. Interment will be made in the St. Paul's Evergreen Cemetery. A luncheon will be hosted at the church following the service for all to attend. Casketbearers will be: Allan Bachmann, Allen Brandt, George Johnson, Steve Breitenfeldt, Harold Breitenfelt, and John Graham. Honorary casketbearers will be: Dickie Drewes, Rod Fudge and Kenny Ketter. Military honors will be provided by the Frazee Heart of Lakes VFW Post #7702 and the Frazee AMVETS Post #612. Visitation will be held from 4-7 PM, Sunday, August 15, 2010 at the Furey Funeral Home in Frazee, MN with a prayer service to be held at 6:30 PM. Funeral arrangements provided by the Furey Funeral Home serving Frazee and Vergas. To leave online condolences, please visit www.fureyfh.com.

To order memorial trees or send flowers to the family in memory of Marvin Bartel, please visit our flower store.