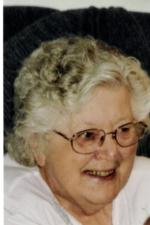 Mary Lou was born June 26, 1921 to Sefton and Louise (Stanton) Miller in Tarentum, Pennsylvania. She attended school in Wilkinsburg, Pennsylvania, graduating with the class of 1939. She then went on to attend secretarial school and was then employed by the David C. Cook Publishing Company in Elgin, Illinois.

Mary Lou was united in marriage to Harry Buhr on December 15, 1950. They made their home in Buffalo, North Dakota until 1961, when the couple bought a farm in Frazee. They also purchased the Northern Inn on Big Toad Lake in 1973. They ran the business until 1989 when they sold it and returned to their farm in Frazee.
Mary Lou and daughter, Amy, lived at the Lamplighter in Detroit Lakes from 2005 until the time of her passing.

Above all, Mary Lou was a devoted wife and mother who took great pride in caring for her family.

She was preceded in death by her parents; her husband, Harry; 2 sons: Robert and Tom; and 1 grandson, Eric.

To order memorial trees or send flowers to the family in memory of Mary Buhr, please visit our flower store.