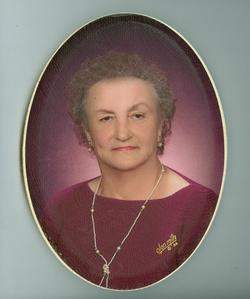 Mary Anna "Skip" Fick, age 80 passed away at her home in rural Vergas on Wednesday, October 22, 2014. A funeral service will be at 11:00 am on Saturday, October 25 at St Paul's Loon Lake Church, Vergas, MN. The visitation will be from 5:00-7:00PM on Friday, October, 24 at the church, with a prayer service at 7:00PM, and will continue one hour prior to the funeral service on Saturday.

Mary Anna "Skip" Fick was born March 11, 1934, in West Columbia, SC to William and Estelle Redmond and was raised in Augusta, GA. She graduated from the Academy of Richmond County in 1951, and went to work for HL Green until 1952 and Georgia Pacific Lumber until 1957.

She and George met at Our Redeemer's Lutheran Church while George was stationed at Fort Gordon with the US Army. They were married on Thanksgiving Day, 1957. They moved to Minot, ND after the wedding and in 1958, moved to Burlington, ND. In 1973, they moved to a farm three miles north of Burlington. In 2000, they moved to Vergas, MN where they currently live.

While living in Minot and Burlington, she was a member of St. Paul's Lutheran Church and participated in many programs there, being an active member of the LWML, holding various offices during that time. She enjoyed singing in the St. Paul's choir.

Skip was the first City Auditor for the City of Burlington. She worked at the Dakota Boys Ranch from 1966 until 1973. During their lifetime George and Skip made many trips to Georgia to see her family. George figured there were 17 meetings with the southern family over a 40 year span. They traveled not only to the southeast; they went southwest, west, and northwest. For Skip's 50th class reunion in September 2001, they were at the Augusta National Golf Club where the green jacket ceremony of the Master's golf tournament takes place. Skip liked to knit, crochet, quilt, and sew. She made all of her grandchildren's baptismal gowns.

To order memorial trees or send flowers to the family in memory of Mary Fick, please visit our flower store.