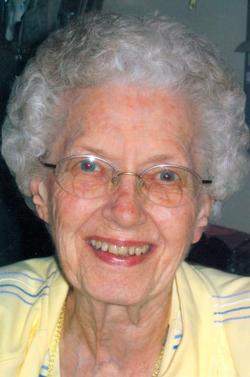 Melvina "Mel" Almidia Trieglaff, age 89, died January 21, 2015 at the Frazee Care Center, Frazee, MN. Visitation will be held Monday, January 26, 2015 from 5-7 p.m. at Furey Funeral Chapel in Frazee, with a prayer service at 7 p.m. Her funeral will be held at Bethlehem Lutheran Church in Frazee on Tuesday, January 27, 2015, at 11 a.m., with visitation at the church one hour prior to the funeral. Burial will be at Lakeside Cemetery in Frazee.

Melvina Almidia Schultz was born in Dent, MN, on June 27, 1925, to William F. and Mathilda (Tober) Schultz. She was baptized and confirmed at St. John's Lutheran Church in Dora Twp., rural Dent. She attended country school at District 164 through 8th grade. She was a 1943 graduate of Perham High School.

Mel married Ralph H. Trieglaff on June 28, 1943 at St. John's Lutheran Church in rural Dent. Their first home was in South Milwaukee, WI, where their first child was born. When they returned to Frazee following WWII, they operated Ralph's Ice Cream Parlor, which they owned until 1955. Mel was the head bookkeeper for Lakeland and later Swift, the turkey processing plants in Frazee, from 1952-1984. She was very active in Frazee Turkey Days, initiating and co-chairing the junior king and queen contest for 20 years.

Mel was an accomplished seamstress, artist and writer. She authored many history books for area towns and churches, books commemorating Frazee Turkey Days' 25th and 50th anniversaries, and "The Frazee MN Centennial 1891-1991." Mel was a member of Bethlehem Lutheran Church in Frazee, where she sang in the church choir for more than 50 years.

Mel was preceded in death by her husband Ralph in 2001, her parents, and her brother Atle U. Schultz.

To order memorial trees or send flowers to the family in memory of Melvina Trieglaff, please visit our flower store.