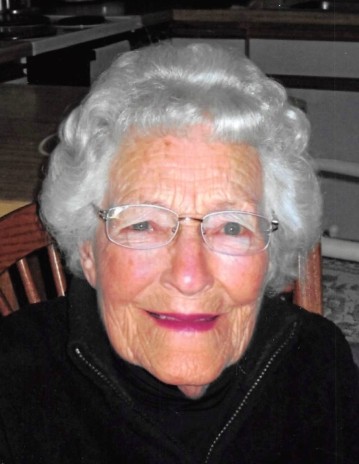 A Celebration of Minerva’s life will be held 11 a.m., Friday, December 22, 2017, at Bethlehem Lutheran Church in Frazee with a time of visitation to begin one hour prior to the service.

Minerva Lorraine was born December 12, 1918, on a farm near Toronto, South Dakota to Rueben and Mathilda (Halverson) Eastman.  Minerva was baptized, confirmed and married in the Lutheran church in Toronto.  She attended Augustana College in Sioux Falls, South Dakota where she attained a teacher’s degree in 1938.  The first four years, she taught in a rural school near her home, teaching all eight grades.  Minerva loved teaching and thought of it as the most rewarding career a person could choose.  Minerva continued teaching for four more years, one in South Shore, South Dakota and three in Clear Lake, South Dakota teaching 7th grade.

Minerva was married to Hans Victor Anderson on May 27, 1945.  Their first home was in El Paso, Texas, where he finished out his tour of duty during World War II.  Their first years of marriage were spent traveling by trailer home while her husband called on farmers.  Roxann was born in 1947. Jon was born in 1951. They lived in Watertown, South Dakota while her husband started his career with New Idea Farm Equipment, moving to Frazee, Minnesota in 1952.

Minerva continued as a homemaker until 1969 when both Roxann and Jon had finished high school and on to college and marriage.  Then, Minerva went back to her first love as a teacher and agreed to do substitute teaching in Frazee/Vergas schools.  Her enjoyment in life

was family, reading, gardening and visiting with friends.

Minerva was an active member of the Bethlehem Lutheran Church teaching Sunday school, release time and vacation Bible school, singing in the choir and serving in many offices of the Ladies Aid and Lutheran Women’s Missionary League.  She served as a Frazee School Board member and held many offices in the Parent Teacher Association.  Minerva was active with the Burlington Cubs 4-H Club, leading the vocal groups to local and regional contests.  For many years she led the sing-a-long at the Frazee Care Center.  Minerva and her husband, Victor, were honored as Grand Marshals of the Frazee Turkey Days in 2008.  They celebrated 63 years of marriage

She was preceded in death by her husband, two brothers: Raymond and Morris; 1 sister, Adelaide; and 2 grandchildren: Ashley and Lucas Anderson.

In Lieu of flowers, memorials are preferred to Bethlehem Lutheran Church.

Click to download / open
To order memorial trees or send flowers to the family in memory of Minerva Anderson, please visit our flower store.
Open