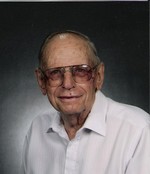 The funeral services for Norman John Kmoch, 79, Dent, Minnesota will be held Thursday, May 21, 2009, at 11 a.m., at St. Paul's Lutheran Loon Lake Church in rural Vergas, MN with Reverend Robert Hinckley officiating. Visitation will be at St. Paul's Lutheran Loon Lake Church one hour prior to the service on Thursday. Interment will be held Friday, May 22, 2009, at 1:45 p.m., in the Fort Snelling National Cemetery in Minneapolis, MN. A memorial service will follow the interment on Friday, May 22, 2009, at Gloria Dei Lutheran Church in St. Paul, MN. Norman died on Monday, May 18, 2009, on the family farm under the care of his wife Laura and Lakeland Hospice.

Norman John Kmoch was born June 4, 1929, at the family farm near Dent, MN to August and Bertha (Noess) Kmoch. He was baptized and confirmed at Immanuel Lutheran Church in Dent, MN. Norman worked for Edling Electric until he was drafted, serving in the U.S. Army from January 1953 to November 1954. He attended North Dakota State University on a G.I. Bill, receiving his BS.E. and began working at Sperry Univac Corporation. On March 17, 1962, he married Laura Fick. They moved to Burnsville, MN in 1964. Norman retired in 1989, and in 1995 they returned to the family farm near Dent, MN where he enjoyed living the remaining 14 years of his life.

He is survived by his wife Laura; two sons, Brad (Nancy) Kmoch and Doug (Julie) Kmoch; and his grandchildren, Emmalee, Willa, Merri-Elisabeth, Taylor and Tristan.

To order memorial trees or send flowers to the family in memory of Norman Kmoch, please visit our flower store.