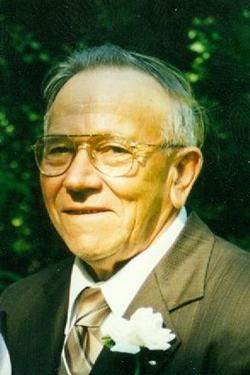 
Fred was born March 11, 1926, at home in Vergas, MN, to Otto and Julianna (Potz) Kratzke. He was baptized at home and confirmed at St. Paul’s Lutheran Church – Loon Lake where he was a life member. He grew up on the family farm, attending District #138 country school through the 8 th grade. He continued to work on the family dairy farm. Fred married Elsie Eckre, who lived on the neighboring farm. The couple married June 2, 1948, at St. Paul’s Lutheran Church – Loon Lake. The couple made their home on Fred’s grandfather’s farm where they raised 4 sons and 1 daughter. Fred worked as a carpenter at Kading Farm and Home for many years which offered him the flexibility to continue his farming. During his younger years, Fred enjoyed hunting and trapping. He enjoyed fishing and playing cards, as well as butchering cattle and hogs. He processed, cured, and smoked meat for many family members and friends. He was best known for his smoked sausage. Fred had a knack for fixing things and was very particular about anything he did. He often said, “The best is none too good”. He had a great sense of humor which he carried throughout his life.


Fred and Elsie made their home on Loon Lake in 1994 when they sold the family farm to their son, Marvin and his wife, Kim. Fred’s life was saddened by the passing of his wife, Elsie in 2006. In 2009, Fred made his home at Oak Crossing due to declining health where he remained until the time of his passing.


To order memorial trees or send flowers to the family in memory of Otto Kratzke, please visit our flower store.