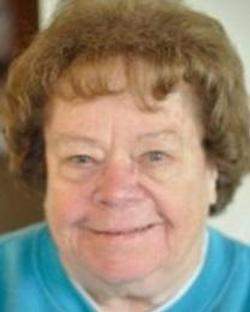 
A celebration of Patty’s life will be held at 1 p.m., Friday, November 27, 2015, at the Vergas Event Center. Visitation will be held from 11 a.m. until the time of service on Friday at the Event Center. Burial will be made at Fort Snelling National Cemetery on Monday, November 30, 2015 at 1:05 p.m. at assembly area number 1. Everyone is welcome to a meal planned following the service.


Patty was born in Minneapolis, MN, July 1, 1928, to Robert John Bullock and Mathilda (Tillie) Moritz Bullock.  She grew up in Minneapolis, MN.  She graduated from Patrick Henry High School and went on to two years of college.  On March 5, 1948 She married Harold Robert Herheim. They lived in Minneapolis.


She worked as an operator for the telephone company, then she was a stay at home mom.  She volunteered as a Girl Scout Leader, Neighborhood Chairman for the Girl Scouts, Sunday School teacher, She was instrumental in having an elementary school built in her area, Served on the Minneapolis Park Board and campaigned for a Park/Playground with a summer rec program for her large neighborhood of “baby boomer” children.  She helped start the PTA for this new school and held several offices through those years.


As her children flew the nest, she went back to work.  She worked at Prudential Insurance Company until she and Harold retired to their lake home on Big Deep Lake, Hackensack, MN.


Patty then volunteered as a Guardian ad Litem for children in her county. She lost her husband to lung cancer in 1989.  Patty then found a new role as a volunteer, doing taxes for the elderly and low income, for free, under the AARP program.  Next, she took on the role of county chairperson for AARP, training other volunteers and helping to set up their sites, while working two sites herself.


Eventually she was doing this for two counties.  A few years ago, she left her beloved lake home and moved to Vergas, MN.  She soon set up a site in Vergas where they called her “The Tax Lady”.


Patty loved meeting people and had many, many friends of all ages, even when she started to have problems with her eye sight, she kept doing taxes.  She also did the payroll for a few small businesses in the Longville area.


To order memorial trees or send flowers to the family in memory of Patty Herheim, please visit our flower store.