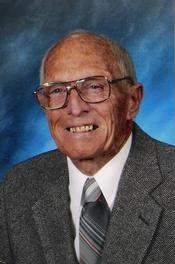 Ralph M. Richter, 82, Vergas, MN passed away January 23, 2012, at Essentia in Fargo, North Dakota. Funeral services for Ralph will be held Saturday, January 28, 2012, at 11 a.m., at St. Paul's Lutheran Church, Loon Lake in rural Vergas, MN, with Reverend Robert Hinckley officiating. Interment will be in the church cemetery. Visitation will be held from 5 - 8 p.m., Friday, January 27, 2012, at St. Paul's Lutheran Church, Loon Lake, with a prayer service at 7:30 p.m. Visitation will continue one hour prior to the service on Saturday. In lieu of flowers, memorials are preferred.

Ralph was born on August 7, 1929, in Bertha, MN to William and Frieda (Bunkowske) Richter. He attended Vergas Country School and Frazee High School, graduating in 1947. After high school, Ralph worked for a farmer in Comstock, MN and also road construction in Kindred, ND. He served in the army from 1951 to 1953, in Germany, during the Korean War. On April 25, 1955, he married Wilma Seedorf at Perham, MN. They purchased a farm near Vergas, MN and started Lost Valley Resort in 1961. Ralph retired in 1990. They spent winters in Fort Mojave, Arizona. He enjoyed working in his shop and spending time in the woods, just him and his chain saw.

Preceding him in death are his parents, son Russell, and brother Leon.

To order memorial trees or send flowers to the family in memory of Ralph Richter, please visit our flower store.