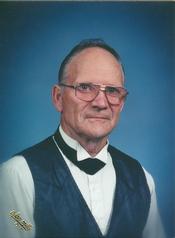 Richard Merel Kvam, 80, of Vergas died Friday, September 27, 2013 after a fifteen year journey with cancer, at his home surrounded by family, special friends, and under the care of Lakeland Hospice.

Richard was born February 27, 1933 in Circle Montana, the son of Moses and Elizabeth (Powell) Kvam. The family moved to Holmes City, Minnesota in 1935 and later moved to Maine Township. He was baptized and confirmed as an adult at St. Paul Lutheran Church, East Friberg.

He served in the army from 1953-1955. He lived in Maine township until he was married to Dorene Rocholl in 1959 and moved to Friberg Township. In 1962 he purchased his first truck to haul milk, a career which continued until 1995. From 1990 to 1995 he also owned and operated gravel trucks. After his retirement he enjoyed helping his neighbors with farming. Richard enjoyed dancing, playing cards, fishing, and working in the woods. He was a member of the VFW Post 7702 and treasured being a color guard for the funerals of fellow veterans.

He was preceded in death by his parents and brother-in-law Daniel Rocholl.

In lieu of flowers, memorials are preferred to Lakeland Hospice or the American Cancer Society.

To order memorial trees or send flowers to the family in memory of Richard Kvam, please visit our flower store.