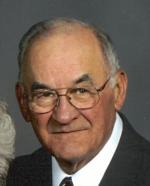 Robert Donald Maneval "Bob", of Vergas MN, died peacefully in his sleep Wednesday, December 29, 2010 at the age of 79.
Funeral services will be held 11 a.m. Monday, January 3, 2011 at the Detroit Lakes United Methodist Church. Visitation will be held from 4-7 p.m. Sunday, January 2, 2011 at the Detroit Lakes United Methodist Church with a prayer service to be held at 6:30 p.m. Visitation will also be held one hour prior to the service at the church on Monday.
Bob was born April 8, 1931 to Fernando and Myrtle Maneval at their home in rural Vergas, MN. He attended country school district 121 in Candor Township, Otter Tail County, MN and graduated from Frazee High School in 1949. In 1952, he was drafted into the United States Army and served with the 24th infantry division in Korea. In 1954, he received an honorable discharge with the rank of Staff Sergeant. He farmed with his father before and after serving in the U.S. Army. In February of 1955, Bob went to work for North Dakota Metal Culvert Company, Fargo, North Dakota. On June 30, 1955, Bob married Eloise Stilke at the Vergas United Methodist Church. They made their first home in Fargo, North Dakota and later moved to Moorhead MN. Bob attended Dakota Business College on the G.I. bill and received a Business Management diploma in 1961. In 1962, Bob went to work for the USDA Hard Red Spring and Durum Wheat Quality Laboratory located at the Department of Cereal Chemistry at North Dakota State University. From 1963-1979, he served as a Food Technologist/Milling Specialist. From 1979 to 1981, he served as Acting Director of the Cereal Chemistry Laboratory. Bob attended Moorhead State College and in 1973 he earned an Associate of Arts Degree. In 1974, at the age of 43, he was first to earn a Bachelor of Science degree in Industrial Technology with a minor in Economics from the then new External Studies Program at Moorhead State College. In 1981, Bob accepted the Plant Manager position with Roman Meal Milling Company (Dakota Specialty Milling) of Fargo, North Dakota. In 1982, he was made Vice President/General Manager of Roman Meal Milling Company. Over the years Bob was active in several organizations including the American Association of Cereal Chemists, the Association of Operative Millers, the North Dakota Grain Dealers Association, the Spring Wheat Quality Advisory Council, the Wheat Quality Council, and the Fargo Moorhead Chamber of Commerce. He was Chairman of the Rotary Club Ag Committee. Bob served on the Industrial Advisory Committee at North Dakota State University, the Moorhead State University Foundation Board of Directors, the Fargo Cass County Economic Development Board of Directors, the Board of Directors of Great Plains Food Bank, Board of Directors Prairie Organic Co-op, Board of Directors Farm Verified Organic and was a life time member of VFW Post 7702 Frazee-Vergas and American Legion Post 15 Detroit Lakes. Bob received the Fargo Chamber of Commerce Presidents Award for outstanding service in 1985. Bob was active in the Vergas Lions. He was also an active member of the United Methodist Church, Detroit Lakes. Bob retired in 1996. He and Eloise moved to their lake home on Ida Lake near Vergas, MN. For several years they spent the winter months in Florida. They also liked to take short trips around the area. Bob loved to hunt, fish, and hobby farm. He loved his "girls". He was very proud of his grandchildren and loved to spend time with them.

Bob was preceded in death by his parents Fernando and Myrtle Maneval and his brother Gerald Maneval.

To order memorial trees or send flowers to the family in memory of Robert Maneval, please visit our flower store.