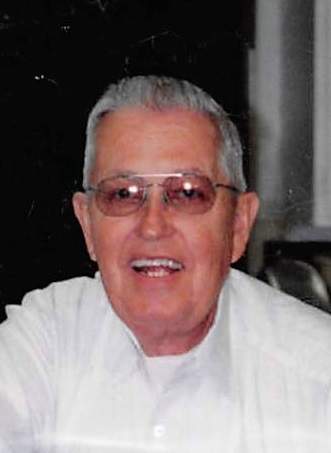 A celebration of Ron's life will be held 2 p.m., Saturday, February 27, 2016, at the Vergas Event Center. Visitation will begin one hour prior to the service on Saturday.


Ronald Goodman was born April 21, 1934, in Craig, NE, to Lowell and Lucille (Olson) Goodman. He attended Craig Nebraska High School graduating with the class of 1951.  He was raised by Faye and Milon Southwell.  They moved to Minnesota in January of 1954.  Ron married Phyllis Perrine and had a son, Jeff McClannahan.  Ron married Barb Townsley in 1959 and the couple had 5 children: Scott, Craig, Theresa, Kathy and David.

Ron worked in Perham with Milon as a mechanic, drove bus part-time for Anderson Bus in Frazee, worked for the Red Owl Grocery Store in Detroit Lakes for a year, then went to Evans Family Grocery Store in Detroit Lakes until buying two grocery stores in Vergas. He closed the LB Hartz store and renovated the Rask Super Valu.  He opened Goodman's Supermarket in September of 1975.  He operated the store until his death.

Ron was very active in the communities in which he worked. He was a part of the D.L. Jaycees, the Sno-Fari Club, Vergas Community Club, Vergas Lions Club, where he was Lion of the year winner twice and Melvin Jones award winner. He participated in the Vergas Boy Scout troop and Neighbor to Neighbor. He was active in the Vergas United Methodist Church and Lakes Area Word Fellowship.  Ron also re-stated the Vergas Graphic Shopper and brought his humorous ads to TV3. Ron was voted into the Minnesota Grocers Hall of Fame.  Ron and Alfred Kading helped start the modern Looney Days Celebration.  Ron also was integral in acquiring a grant from LB Hartz Company to build the Vergas Tennis Courts.

Ron enjoyed the outdoors. He liked to fish the area lakes and enjoyed hunting season and was an avid snowmobiler. He also enjoyed watching sporting events, playing cards, bowling and having fun with his family and friends.  He will be dearly missed.

Ron is survived by his children: Jeff (Marla), Scott, Craig (Keri), Theresa, Kathy (Doug), and David (Angie); along with many grandchildren and great grandchildren; brothers, Richard (Helen), Robert (Margaret), Delbur LeRoy (Diana); sister, Marlene (Joe) Pearson; as well as numerous nieces, nephews and cousins; and is also remembered by all of his former employees of Goodman's.

Preceding Ron in death were his wife of 54 years, Barb; his parents and grandma, Faye and Milon; brother, Edwin LeRoy; and numerous aunts, uncles and cousins.

To order memorial trees or send flowers to the family in memory of Ronald Goodman, please visit our flower store.