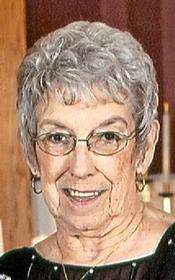 Friends may call 4:00 - 8:00 PM Thursday with a prayer service at 7:30 PM at Furey Funeral Home, Frazee, MN. The visitation will continue 1 hour prior to the service at the church on Friday. Furey Funeral Home is serving the family. Online condolences can be share at www.fureyfh.com.

Sandy Jean Niemann-Morrow was born February 7, 1938, in Frazee to Gordon and Hilda (Henn) Nunn. She was raised and educated in Frazee and is a 1956 graduate of Frazee High School. Following graduation, Sandy moved to Fargo where she worked in the office at Hart Motor Company. She returned to Frazee in 1957 and began working at the Becker County Welfare Office in Detroit Lakes. Sandy was united in marriage to Marvin Niemann, December 1, 1957, in Frazee. They made their home in Edgar, WI where Daggett Truck Lines had a relay station. In 1963, they purchased Krause Grocery Store in Frazee. In 1967, they purchased the Gambles Store building from Ed Ludtke and moved the grocery store into the bigger building in 1968. In 1978, they closed the grocery store and opened the Korner Kanteen, which they owned and operated until 1983 when they sold the business to Bruce Trieglaff. From 1954 - 1980, Sandy gave the Frazee News over KDLM Radio at 12 Noon. This was a live program which, for many years, was aired from her studio in the basement of the grocery store. Marv died in 1990. Sandy was united in marriage to Laddie Morrow, July 7, 1995, in Frazee. They made their home in Frazee until Laddie's death in 2007.

To order memorial trees or send flowers to the family in memory of Sandy Niemann-Morrow, please visit our flower store.