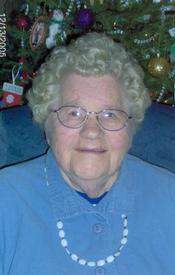 Sigrid Wacker, age 90, of rural Frazee, MN, passed away Saturday, November 3, 2012, at the Perham Living Center with her family at her side.

Sigrid was born June 26, 1922, in Willmar, MN, the 6th of 11 children born to Nicoloi and Hilda Nelson. She grew up in Toad Lake Township where she attended country school through the 8th grade. Following her schooling, Sigrid moved to St. Paul, MN, where she worked as a nanny for a year. She then made her way back to Evergreen Township where she was united in marriage to John Wacker on July 31, 1940, at the Evergreen Church Parsonage. The young couple made their home on a dairy farm in Evergreen. The union was blessed with 5 children: Merlin, Lois, John, Diane and James.

Aside from her work on the family dairy farm, Sigrid gained employment at the Swift Turkey Processing Plant and then Willard Mickelson's Turkey Farm.

She enjoyed taking care of her growing family and will always be remembered for her home cooked meals and baked goods. She was especially good at preparing stuffed fish, which was served as the Christmas meal each year along with her fresh baked bread. She also had a knack for cooking wild game and many friends and neighbors brought their ducks, fish, grouse and other game to her to be cooked. She also prepared true Norwegian dishes which included lefse and fish-head soup.

Sigrid and John were avid fishers and loved to be out on the lake both winter and summer. Sigrid also enjoyed hunting, though she never actually got a deer. She was a great quilter, knitter and spinner. She made a quilt for each of her children and knitted many pairs of mittens and socks.

Sigrid was always active in her church and attended Toad Lake Lutheran Church until its closing and then joined St. Paul's Evergreen Church where she taught Sunday school and was active in the ladies aid.

Above all, Sigrid had a true love and devotion to her husband, children, grandchildren, great grandchildren along with her neighbors and friends. Her life was dedicated to the care and needs of those she loved.

She was preceded in death by her parents; her husband, John in 2000; 8 sisters and 1 brother.

To order memorial trees or send flowers to the family in memory of Sigrid Wacker, please visit our flower store.