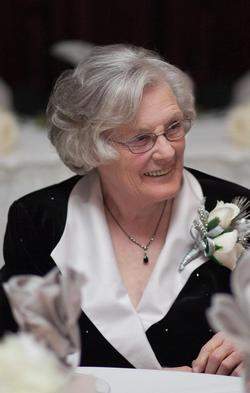 Velma was born July 9, 1937, in Jefferson, IA, to Charles and Eileen (Williams) Stougard. She grew up in Iowa, attending R. L. Downing High School, graduating with the class of 1955. Following her schooling, Velma married William John Olson. The couple made their home in Keewatin, MN where they had 3 children: Kevin, Charlotte and Allen. The family moved to Detroit Lakes in 1963, then to Callaway, MN, in 1964. Velma worked as a waitress at the Baker's CafAC. in Callaway for many years. The families' life was saddened by William's passing in 1969.

Velma was later blessed to meet Jerry Sullivan. The couple married at the Tulaby Lake Chapel on September 30, 1972. The family resided in Callaway until 1976 when the couple moved to rural Menahga where Velma remained until the time of her passing.

Velma loved to garden and looked forward to tending large vegetable gardens each year. She was very dedicated to the Orphan Grain Train in Morris, MN, and stayed involved collecting, sorting and distributing clothing to those in need around the world. Velma looked forward to her yearly Mission trip to Texas each winter where she volunteered with the "His Hands Mission". Her greatest joy in life, however, was her family. She loved the time she spent with her children, grandchildren and great grandchildren.

She was a member of St. Paul's Lutheran Church - Evergreen since 1976. She stayed involved in many church activities and was willing to help with anything she was asked of and more. She will be dearly missed.

To order memorial trees or send flowers to the family in memory of Velma Sullivan, please visit our flower store.