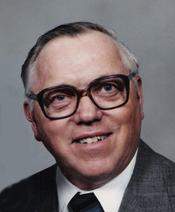 Friends may call at St. John's Lutheran Church on Friday from 5:00 - 7:00 PM with a prayer service at 7:00 PM. The visitation will continue 1 hour prior to the service at the church on Saturday.

Vernon Walter Gorentz was born July 26, 1929 in Dora Township, rural Vergas to Gustav and Julianne (Harke) Gorentz. He was baptized and confirmed at St. Paul's Lutheran Church at Loon Lake near Vergas. He served in the armed forces during the Korean War and was a member of the John Bridges American Legion Post. Following his discharge from the service, he farmed with his brother on the home farm. He later went into business for himself doing road grading, snow plowing and ditch mowing for Dora Township.

Vern was united in marriage to Caroline (Janke) Bunkowske September 2, 1978 at Bethlehem Lutheran Church in Frazee. They made their home in Frazee for 3 years and returned to Vergas in 1981. He entered the Frazee Care Center and moved to the Veterans Memorial Home in December, 2012.

Vern was a member of St. John's Lutheran Church and had served on the church board.

To order memorial trees or send flowers to the family in memory of Vernon Gorentz, please visit our flower store.