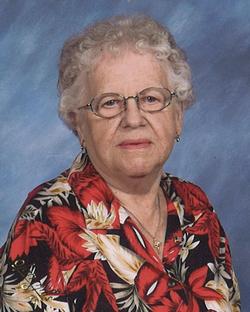 Funeral services will be held 2 p.m., Thursday, July 2, 2015, at Bethlehem Lutheran Church in Frazee. Visitation will begin at 12:30 p.m. Burial will be made at Lakeside Cemetery in Frazee.

Verona Anna Maud Lueders was born August 21, 1918, in Perham, MN, to Fred and Maud (Truhn) Lueders. Verona was baptized September 15, 1918, and confirmed July 10, 1932, at Bethlehem Lutheran Church. She grew up in Gorman Township where she attended country school.
As a young woman Verona worked at Dayton's Department Store in downtown Minneapolis. Later she and two sisters traveled to California to work. Verona worked as a nanny for the children of a French camera director for several winters. She made the trip by train, other times driving in a Model T Ford. During the summer months, she would return home to help on the family farm where she was responsible for many of the chores, as two brothers were serving in WWII. She particularly enjoyed driving the tractor!
Verona was united in marriage to Darwin H. Kraus February 8, 1945, at Bethlehem Lutheran Church in Frazee. The couple had 2 children: Don and Marilyn.

Verona and Darwin owned and operated Kraus Food Center in Frazee for many years where they worked side by side. She truly enjoyed caring for her family. In 1971, following Darwin's devastating stroke at the age of 49, she tirelessly cared for him for the next 25 years. Because of her care, Darwin lived to know and love six grandchildren as well as a great-grandchild. The couple traveled often and continued to do so for many years following Darwin's stroke. With an adventurous spirit, Verona continued to travel to South Dakota and California after Darwin's death.

Verona was a life-long member of Bethlehem Lutheran Church and a member of the LWML and quilters group. Volunteer work was very important to Verona and she volunteered countless hours for St. Mary's Hospital where she knit caps for newborns. She also quilted and donated quilts to those in need at the crisis center. She volunteered as a hairdresser at the Frazee Care Center. She had a passion for the Bethlehem Lutheran Church Pre-School and she and Darwin donated land for the pre-school playground.

Verona also had a deep love for family and enjoyed the time she could spend with them. She loved to crochet and quilt, and many family members still treasure pieces that she gave to them.

Preceding her in death were her parents; husband, Darwin; 4 brothers: Louis, Wilfred, Raymond and Monroe Lueders; and 2 sisters: Hilda Myhre and Edna Olsen.

Memorial are preferred to the Bethlehem Lutheran Church Pre-School.

To order memorial trees or send flowers to the family in memory of Verona Kraus, please visit our flower store.