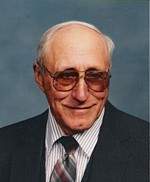 The memorial service for Walter Clarence Damlo, 91, Detroit Lakes, MN and formerly from Frazee, MN, will be Thursday, September 3, 2009 at 11 a.m., at Bethlehem Lutheran Church in Frazee, MN, with Reverend William Aufdenkamp officiating. Burial will be at Gorman Township Cemetery. Visitation is scheduled from 10 - 11 a.m. on Thursday, September 3rd, at Bethlehem Lutheran Church in Frazee. Walt died peacefully at his residence in Detroit Lakes, MN on Monday, August 31, 2009, under the care of Hospice.

Walter Clarence Damlo was born on January 5, 1918, in Gorman Township, to Christ and Martha (Bockhaus) Damlo. He grew up in Dora Township of Minnesota and was baptized and confirmed at St. Paul's Lutheran Church in Perham, MN. On August 1, 1943, Walt married Elfrieda Gorentz at St. Paul's Lutheran Loon Lake Church. In 1947 they moved to Frazee. Walt farmed until he retired in 1993, selling the farm and moving at this time to Detroit Lakes, MN. He served for several years on the Silver Leaf Township board, as well as Bethlehem Lutheran's church council.

Preceding Walter in death are his parents Christ and Martha Damlo; his sister Blondina Fehlauer; and his brothers, Adelbert, Herbert, Frederick, Lambert and Marvin.

To order memorial trees or send flowers to the family in memory of Walter Damlo, please visit our flower store.