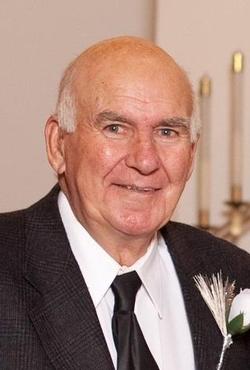 Wenzel "Bub" was born in Candor Township on April 4th, 1929 to Alvin and Lucille (Lachowitzer) Soland. He was raised in rural Candor Township where he lived all of his life. He was united in marriage to Florence Strelau on April 20, 1952 in Dent, Minnesota. They raised four children in their rural Vergas home where they farmed dairy cows and later owned and operated a mink ranch.

Bub took pride in the simple pleasures of life. He enjoyed cutting wood, gardening with his family, and growing his treasured fall raspberries. He especially loved running his road grader and any other heavy machinery he could find. He took solemn pride in an honest day's work and spent countless hours on the farm taking care of the animals. Baseball held a soft spot for him as he grew up playing for the Vergas Loons, and later watched his grandsons play each Sunday. Some of Bub's happiest memories took place with his family making venison sausage or spending time at "The Point" for fish fries.

He is survived in death by his four children: Bruce of Vergas, MN, Barbara (Charles) Hanson of Fergus Falls, MN, Brenda (Robert) McDonald of Detroit Lakes, MN and Bryan (Jean) of Vergas, MN; eleven grandchildren and seven great-grandchildren; one sister, Phyllis Leitheiser of Detroit Lakes; and many nieces and nephews. He will be deeply missed by all his family and friends.

He is preceded in death by his beloved wife Florence, his parents Alvin and Lucille, many aunts and uncles, and other family members.

To order memorial trees or send flowers to the family in memory of Wenzel Soland, please visit our flower store.