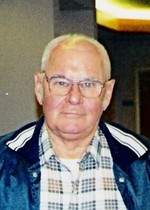 A Mass of Christian Burial for William Henry Hunstiger, 82, Vergas, MN will be held Saturday, December 19, 2009, 11 a.m., at Sacred Heart Catholic Church in Frazee, MN with Father Xavier Ilango officiating. Burial will be at the church cemetery. Visitation is scheduled, at the church, for one hour prior to the service on December 19th. William died Wednesday, December 9, 2009, at the Perham Memorial Home in Perham, MN.

William Henry Hunstiger was born on October 13, 1927, in St. Cloud, MN to Joe and Mary Hunstiger. He grew up and attended school in St. Cloud and at the age of seventeen he entered the Navy where he was a butcher and cook. After his discharge from the Navy, William moved to Austin, MN and worked for Hormel until he retired at the age of 62. He drove truck over the road for five years. In 1988, he moved to the Vergas area where he lived until his death. He enjoyed woodworking and being out in the woods.

Preceding William in death are a son Matthew Hunstiger; his parents, brothers and sisters; and his first wife Pat.

To order memorial trees or send flowers to the family in memory of William Hunstiger, please visit our flower store.