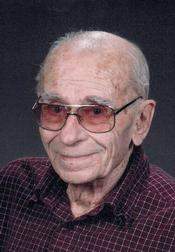 William LeRoy Slupe age 92, of Frazee, passed from this life July 25th 2013 at the Frazee Care Center, under the Care of Hospice of the Red River Valley and the Fargo VA. Funeral services will be held 11 a.m. Monday, July 29, 2013, at Furey Funeral Home in Frazee with Reverend William Aufdenkamp officiating. Interment will be made at Lakeside Cemetery. Visitation will be held from 5-7 p.m. Sunday, July 28, 2013, at Furey Funeral Home with a prayer service to take place at 6:30 p.m. Visitation will continue one hour prior to the service on Monday.

He was born in Douglas, Wyoming on November 05, 1920 to Roy and Dorothy Slupe. Early in his youth he moved to Sioux City, Iowa where he was raised by his aunt, Edna Gilbert and his grandmother Annette Gilbert. In 1937 he joined the Iowa National Guard. In 1939, seeking a fulltime job, he joined the Navy. World War Two found him serving with the Pacific Fleet on a variety of ships, throughout the conflict. During the war he rose through the ranks to chief petty officer, before being discharged in late 1945.

In 1944 he met and married his first wife, Ruth. After his discharge Bill and Ruth moved to Long Beach, California where Bill drove a delivery truck until he partnered in a gas station. Over the course of their union, they raised four children; Roy, Bill, James and Anne. In 1954 the family moved to Ruth's family farm south of Jamestown, ND until Ruth's passing in 1963.

Bill returned to trucking, working for several companies before coming to the Daggett Truck Line of Frazee, MN, where he settled in the early 70's. He married Helen Johnson in 1963 and remained with her until her death in 1982.

Bill continued driving truck for Daggett until retiring in the late '80's. During this time he married Mildred Ashton Steffens of Frazee. They were very devoted to each other until her passing in 1995.

Bill was preceded in death by his parents, his sister Lola Mae, his brother Leroy, his three wives, and a great grandson, Cole Rux. He is survived by his children; Roy (Rita) Slupe of Frazee, MN, Bill (Linda) Slupe of Boise, ID, James (Jill) Slupe of Caldwell, ID and Anne (Robert) Teckemeyer also of Frazee, MN; along with 10 grandchildren and 18 great grandchildren.

In lieu of flowers or memorials, please make donations to Hospice of the Red River Valley.

To order memorial trees or send flowers to the family in memory of William Slupe, please visit our flower store.